ExquisitesFilms Of The Year
Posted on December 13, 2015
By Annie Choi

If there’s one thing we want to say here at Bleeding Skull! it is this: Thank you.

Thank you from the depths of our hearts, which will hopefully be pulled out and eaten by a deranged psychopath in a dime-store mask and a homemade hood lovingly crafted from Nana’s curtains.

Thank you for helping us make 2015 one of the best ever.

Thank you for supporting our latest Bleeding Skull! Video release, Night Feeder, a maniacally gruesome ride fueled by drugs and tasty murder. Tasty, tasty murder. We cannot believe the VHS is sold out. You give us hope that in this hashtag age where people can look up cat videos on their goddamn selfie machines, VHS can still thrive.

Thank you for supporting our Kickstarter campaign to help us finish and release James Bryan’s Jungle Trap, an opus from 1990 that stars the legendary Renee Harmon, a bunch of savage ghosts, an alcoholic pilot, and a narcissist who spends a lot of time checking her make-up. We are excited to work with Jim, who is a kind and generous soul with unflagging passion.

Thank you for supporting yet another Kickstarter campaign, this one for Something Weird and the American Genre Film Archive, a nonprofit we have close ties with (read: This is our lifeblood). AGFA is dedicated to saving exploitation and horror titles that would’ve otherwise be cast aside and left for dead. But you saved them. You are heroes. You are warriors. We salute you.

There is, however, one shadow that cast over Bleeding Skull this year, and it was W.G. MacMillan’s passing. He was, and is, the beautifully twisted and ambitious visionary behind Cards Of Death. We feel immensely honored that we got to work with him and share his legacy. Rest in peace and wherever you are, we hope there are priests impaled on wrought iron fences and New Wave dominatrixes.

This year we watched a lot of truly fantastic films and it was hard to trim it down to our ten favorites. But we did it. These titles range from black and white arthouse trash to explosive dad-action. One of the movies stars Gene Simmons (but don’t let that stop you from watching it). So here they are. Please enjoy them, savor them, share them, champion them. Spoiler alert: None of these movies star a CGI Leonardo DiCaprio. Hope that’s OK.

Arpie (Fabio Salerno, 1987)
DVD-R / Full Review
“During its short 40 minute runtime, Arpie alters your headspace. It’s like Fulci’s The Beyond as seen through a haze of youth, inexperience, and third-generation VHS crust. There’s no reasoning behind what’s happening, but the otherworldly mood persists . . . The camera never sits still, mistakes are left in, and the gore effects feel impressive in the same way that making pancakes from scratch for the first time feels impressive — it’s a sense of accomplishment that feels great.”

Bad Magic (Mark and John Polonia, 1997)
Salt City Home Video VHS
“Renny summons a demon named Blahkeeblahkay. Now Renny is ready to take revenge on The Red Claws. Death by voodoo doll! Death by the undead! And, in a cinematic first, death by toilet paper. But what happens when Blahkeeblahkay needs to collect the fee for his services? And what happens when no-fi superhero Mark Polonia has sex with the world’s most least convincing prostitute? Bad Magic is an invigorating, shot-on-video dream-blast that breaks new ground in side-stepping reality.”

Cross Of Seven Jewels, The (Marco Antonio Andolfini, 1987)
Exciting Video VHS / Full Review
“The Cross of Seven Jewels offers everything you love about werewolf movies — gore, gratuitous furniture smashing, more gore, close-ups on claws, and transitions from man to werewolf and back again. There aren’t a lot of twists or jump-scares, but the film makes up for it with its heavy dose of Italian seasoning. There’s S&M sleaze, flashes of peen, ineffectual polizia, henchmen who complain about — what else — their wives, aggressive lovemaking between a beast and a sexy fortuneteller, and, of course, mommy issues.”

Hallucinations (Mark and John Polonia, 1987)
Sub Rosa Studios VHS / Full Review
“A kitten is mutilated by a chainsaw. A severed leg appears in a refrigerator. A Freddy Krueger-esque slasher shows up wearing an Adidas snowsuit. But the gross-out gags are slowly engulfed by sexual perversion. In a scene that was reused for Splatter Farm, John shits out a knife and finds himself castrated in the process. The camera lingers on the crotch of his whitey-tighties as he fondles himself and gore seeps out of the wound.”

House Of Dreams (Robert Berry, 1963)
Sinster Cinema DVD-R / Full Review
“It’s like we’re witnessing a series of dark events that we shouldn’t be, and a droning, melancholy spookiness lingers because of it. House Of Dreams works in the same way that Edward D. Wood, Jr.’s short fiction works — we’re forced to pay attention because we’re captivated by what’s unknown. It doesn’t matter how that feeling is communicated to us. By the end, the movie could be interpreted as an accidental art experiment or a metaphor for sexual frustration.”

Karate Cop (Alan Roberts, 1991)
Imperial Entertainment VHS / Full Review
“There are explosions, bullets galore, an extended dance sequence with a skank and her snake, and a very satisfying scene where people beat up a car. If there’s one thing this movie teaches us, it’s that is actually kind of hard to beat up a car. . . .Karate Cop has a strong saving-the-children element that is supposed to give the film some gravitas, but doesn’t. Because we don’t care about saving children. We care about seeing David Carradine come out of nowhere and serve Marchini rabbit stew.”

Key To Vengeance, The (Lo Gio, 1988)
American Video VHS / Full Review
“Watching The Key To Vengeance is like drinking a suicide soda that was built from three-thousand flavors. It makes your eyes burn and your insides buckle, but there’s no other experience like it. And there never will be again. Because Ho’s technical decisions are as ridiculous as the fashion choices of his cast . . . There’s a constant influx of unknown characters, illogical jump cuts, and nonsensical conversations. Everyone speaks English, but that means nothing to us. How can it? When Larry defeats a ninja, he glances at his friend’s crotch and says, ‘You’re quite a guy!'”

Never Too Young To Die (Gil Bettman, 1986)
Charter Entertainment VHS  / Full Review
“Full disclosure: I hate KISS. I hate their garbage music and their garbage lyrics and their garbage personalities. I’d rather listen to any of the following other than KISS: ambulance sirens, pigs in the throes of slaughter, someone jogging on an accordion, a Millennial talking about his beard . . . Yes, we get it, Gene, your tongue is long, but I’d be more impressed if you just shut the fuck up. But as much as Simmons is an insufferable, talentless, egotistical hobgoblin, he delivers in this movie. In fact, he over-delivers. It’s like ordering a sandwich, but then the server brings you a conquistador platter of everything fried and smothered in cheese, plus a donkey-sized bucket of ice cream and all your best friends.”

Psycho Cop 2 (Rif Coogan aka Adam Rifkin, 1993)
Columbia/Tri-Star Home Video VHS / Full Review
“He’s back! And obviously he’s still psycho. Two 9-to-5 bros sit at a diner. One is wearing suspenders and a belt, because those pants really need to stay up. They talk about throwing a bachelor party at their office after hours. A plan has been hatched. Alcohol has been secured. Weed has been procured. “Feminine entertainment” has been arranged (hint: it’s not a complete season of Sex In The City or a pile of tampons). The building’s night watchman has been paid off. Everything is in perfect order except for the fact that the last place anyone wants to be after work is at work . . . As the bros discuss details, a cop that you and I both know is psycho listens silently. He simmers. He judges. He eats a donut in slow motion because a psycho cop is still a cop, and cops like donuts.”

Rock House (Jack Vacek, 1988)
Coyote Home Video VHS / Full Review
“This is the typical Dad-action movie, only with 100% less Steven Seagal. There are no twists and turns (save the cars) and no dark or complicated themes, and every trope is driven into the ground or driven off the side of a building. The premise is straightforward: Good cop chases bad guys. Rock House is predictable, sure, but it’s pure at heart. This is a film that embraces its Dad-ness, which is what makes it so endlessly entertaining. It’s a bottomless well of fun, packed with ambition that can be felt in the stunts and the editing, but not in the plot . . . When all’s said and done, Rock House releases your inner Dad, even if you don’t have children and even if you have a vagina.” 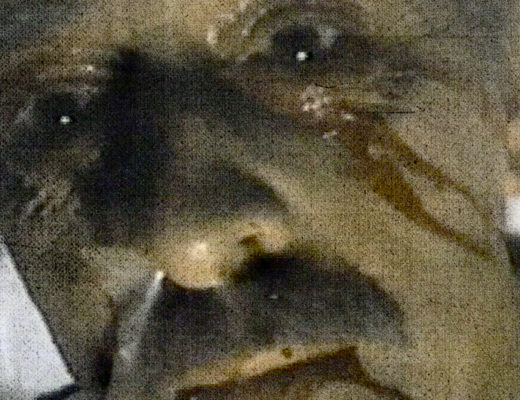 Exquisites 2007: Films Of The Year 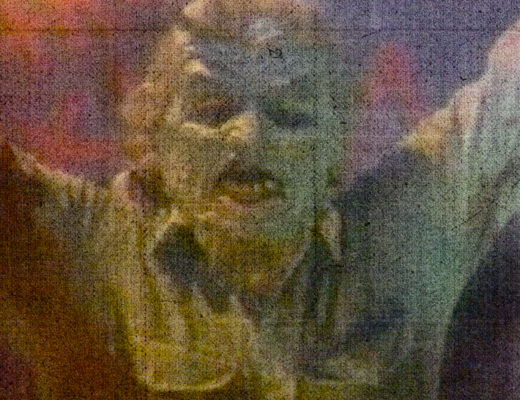 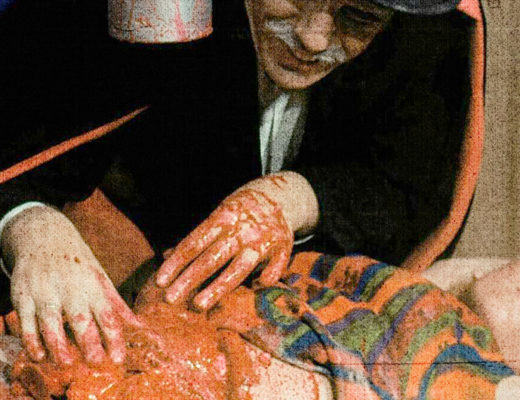