Directed by Don RussellSomething Weird VHS
Posted on March 20, 2014
By Joseph A. Ziemba

As Tales Of A Salesman begins, we see smoke and abstract colors. A voice channels Oliver Hardy:

“Hello out there! I’m a poltergeist, sent down here to help salesmen! I’m the gremlin of the spirit world. And I do awful things. But man, do I have fun! For example, right now I’m here on your planet trying to help a salesman with problems.”

Cut to a close-up of naked breasts.

After forty-five seconds, it’s obvious that this movie is something special.

Sixty years ago, nudie-cuties were the epitome of red-hot sexuality. Women taking showers! Women doing The Twist! Women putting on high heels while lying in bed! ALL (ALMOST) NAKED! Today, slogging through a nudie-cutie takes more effort than being cordial to someone who wears a hoodie without a shirt underneath. Even nudie-cuties that were directed by lunatics like H.G. Lewis (The Adventures Of Lucky Pierre) and Barry Mahon (Nude Scrapbook), are relentlessly boring and repetitive. But there are exceptions — instances when madness, creative drive, or a rejection of reality take over. That’s when nudie-cuties get good. That’s what happens when Russ Meyer one-ups Jean-Luc Godard with the pop-art earthquake known as Wild Gals Of The Naked West. That’s also what happens when Bob Cresse dresses in drag and keeps a werewolf for a pet in House On Bare Mountain. That’s what happens when Tales Of A Salesman happens.

Herman is a door-to-door brush salesman who looks like a tired Buster Keaton in a Colonel Sanders suit. Faced with a deadline and a lack of confidence, Herman is down in the dumps. That’s where the invisible poltergeist comes in. The ghost says, “Sit on this curb and wait for me — I’ll check out the territory!” In this case, “the territory” is a woman vacuuming her living room while wearing nothing but panties. After that, he spies on a nude woman in a swimming pool (“It may not be nice to spy on a lady, but who in the spirit world is nice?”). Then it’s Herman’s turn. Herman enters a house and watches a doppelgänger of himself dry-hump a woman on a couch. At another house, Herman tries to stop a runaway vacuum because it keeps removing a woman’s towel, leaving her naked. After a few more vignettes involving pie fights and disappearing bras, an angry husband catches Herman. He is sent to Limbo.

Limbo is someone’s garage and a smoke machine. Herman is put on trial by the various ladies he encountered during the first half of the movie. Herman’s boss appears as a Victorian-age judge who keeps repeating, “GUILTY! Let the punishment fit the crime!” The earlier vignettes are re-enacted, but with the added bonus of 2-D pop-art furniture, balloons, vampire fangs, a knife murder, technicolor pie fights, a firing squad, and finally, a hanging. Also, a woman places a vacuum in Herman’s mouth and inflates his stomach. It’s the same thing that happened to Larry Fine in The Three Stooges’s Corny Casanovas, but with boobs.

Tales Of A Salesman does for 1960s nudie-cuties what H.O.T.S. did for 1970s T&A comedies. H.O.T.S. invigorated a stale template with throwback screwball antics, like a Borscht Belt bank robber disguised as a robot and a pie fight in an hot air balloon. Tales does the same thing, but it pushes the weirdness factor into another stratosphere. Director Don Russell was an assistant on a handful of Ray Dennis Steckler’s mid-1960s hits, including the similarly-composed The Lemon Grove Kids Meets The Monsters. Russell obviously learned a lot from Steckler. He piles on “boing” sound effects, timpani hits, chipmunk voices, and Keystone Cops “undercranking.” Russell also likes to show us people falling down a lot. The movie has a reckless energy. It never stays put for too long, feeling like a mutant Mack Sennett two-reeler that was expanded to 60 minutes because they had to make room for naked people. If Tales was a fast-paced nudie-cutie with surreal reproductions of 1930s slapstick gags — and nothing else — it would still be pretty great. But this movie begins with a poltergeist that speaks directly to the audience and ends with sexual murder fantasies that result from work-related anxiety. It’s chock-full of broken logic, visual insanity, and happy, naked imbeciles.

If this is a glimpse of what it’s like to live in the spirit world, I can’t wait to die. 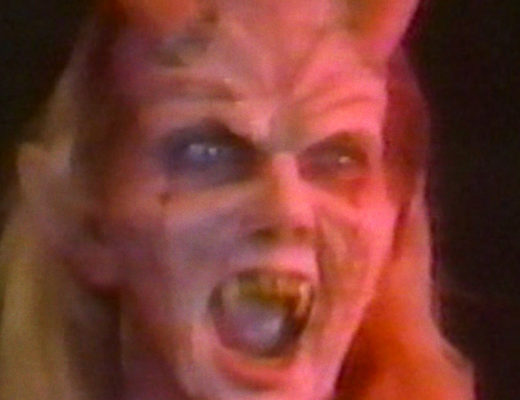 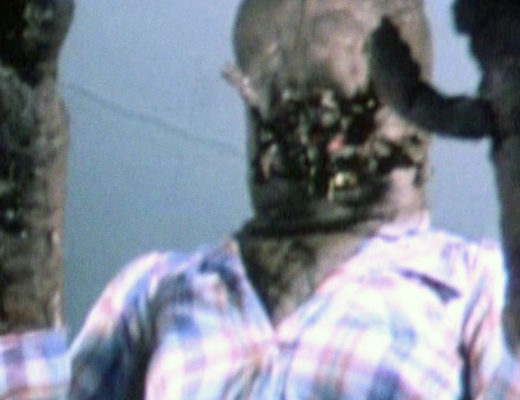