Directed by Enrique Carreras and Bill DaviesSomething Weird VHS
Posted on July 25, 2013
By Joseph A. Ziemba

Nine seconds of this movie are presented “In Magicmation.” The other 75 minutes are not.

You do the math.

I like cobwebs. I’m into cemeteries. I also think it’s neat when the ominous stock music from The Beast Of Yucca Flats gets matched up with a scene of a door opening. Legend Of Horror has all of these things. It also has Magicmation, which is a fancy way of saying “stop-motion violence.” Unfortunately, Magicmation is not a fancy way of saying “stop-motion excitement.”

John is arrested for the “attempted seduction” of the mayor’s wife. He is sentenced to fifteen years in a plywood cell. The guards wear colonial outfits, but this is not a period piece. The man’s cell mate, old man Sidney, cackles a lot and keeps a pet rat named Tommy. Tommy frolics in some hay. He does this for at least three minutes. The two convicts try to pick up a log outside, but Sidney hurts himself. While Sidney recovers, John discovers a hidden tunnel in their cell. Sidney says, “Now you have discovered my secret!” BAM! FLASHBACK!

A twenty-one-year-old Sidney shows up at his uncle’s clock shop because he needs a place to sleep and eat. They wear colonial outfits, since this is a period piece. Also, Uncle has a bum eye and fake monster teeth. It is established that Sidney helps out a kid named Tommy, “the cripple,” by giving him glasses of milk in the morning. Uncle is not happy about this. Then Sidney breaks a vase and Uncle loses his shit and holy geez this is going nowhere.

Legend Of Horror was cobbled together from an Argentinian Edgar Allan Poe adaptation called Obras Maestras del Terror (the flashback sequence transforms into “The Tell-Tale Heart”) and some American wrap-around footage from 1966. The footage from Argentina is competent, making the most of shadows, movement, and elaborate sets. It shares the same chintz-goth feel as the early 1960s Mexican horror films, like The World Of The Vampires and The Living Head. The footage from America looks like it was shot in someone’s basement. They also misspell Poe’s name. Needless to say, no one involved was thinking about consistency. I admire that blatant disregard for logic. I love the fact that this thing was thrown together with the hope that it would make sense. People like Al Adamson and Jerry Warren built careers out of the same approach. It wasn’t about audience satisfaction. It was about getting a movie in the can, recouping the costs, and moving on to the next project. Sometimes, this method resulted in something special, like the 117 ninja movies made by Godfrey Ho. In this case, it resulted in two men lamenting the death of a rodent named Tommy while sitting on a sand dune.

The problem with Legend Of Horror is that it’s filled with nothing. No charisma. No variety. Nothing to get us through. The tone is relaxing at first, but it never changes. Boredom builds on boredom until we feel trapped. We’re begging for something — anything — to happen. It finally does, in the form of some color stop-motion carnage and a climax in a fog-shrouded cemetery. But by that point, my tolerance was destroyed. Instead of paying attention, I imagined that this movie was a prequel to Orgy Of The Dead. I saw Criswell floating over Fawn Silver, just out of frame, pointing at her and saying, “THERE is the ONE who will be at my side for all eternity!” Then he would summon his minions, Wolfman and Mummy, to perform the sacrificial rites that would convert her to one of the night people.

That daydream was the most fun I had while watching Legend Of Horror. Please note that it did not require Magicmation. 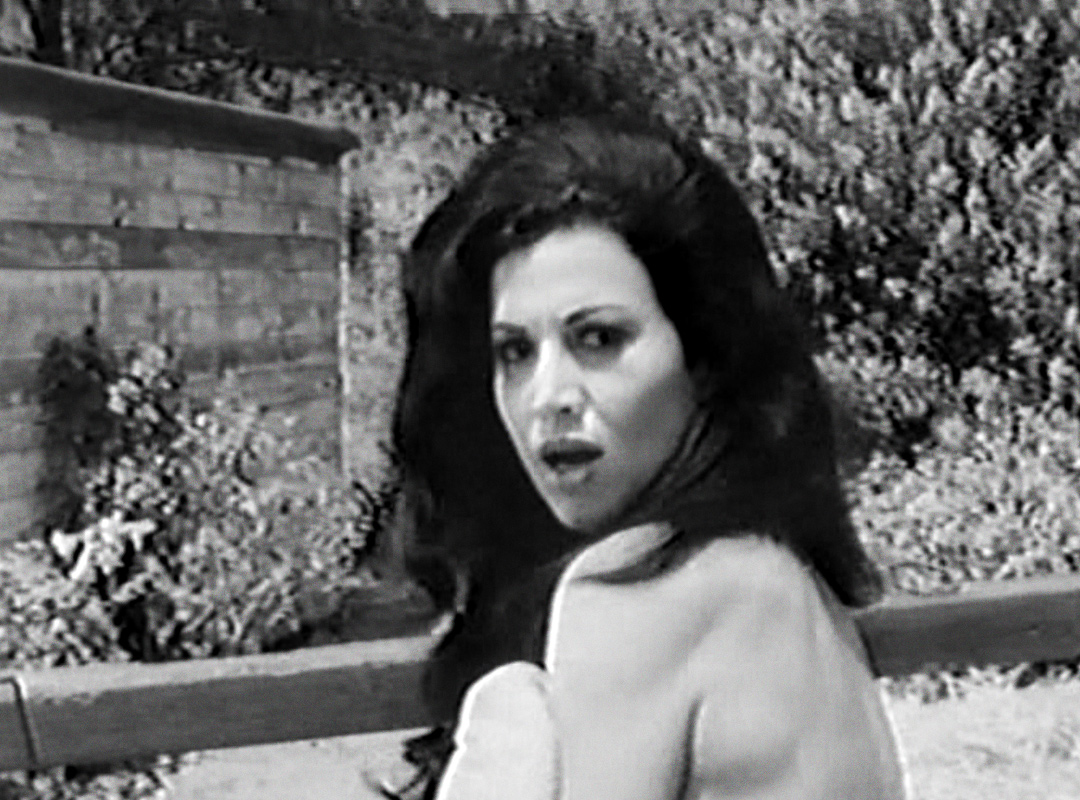 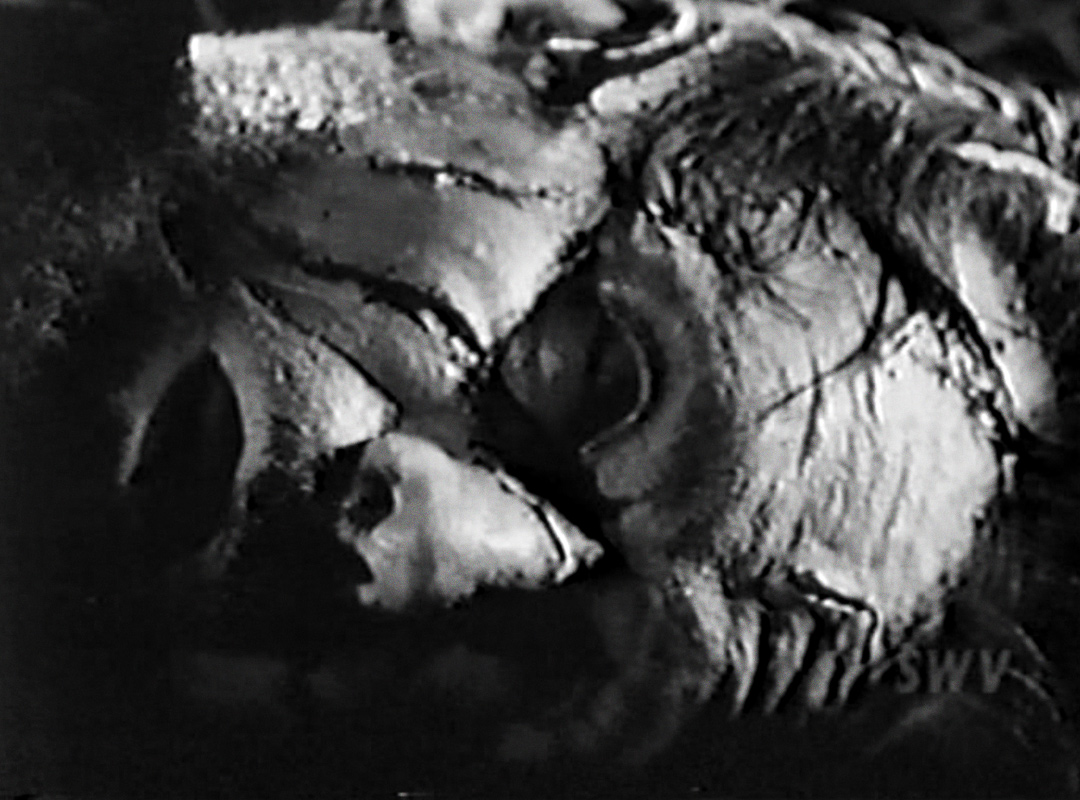 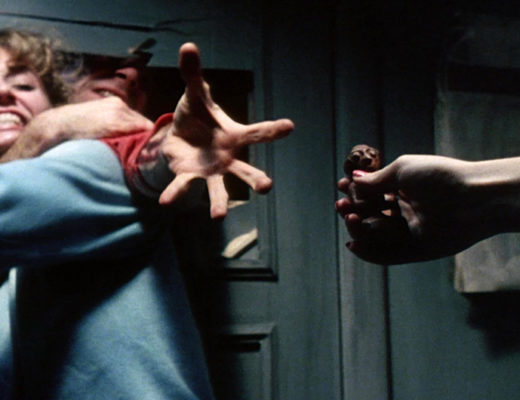 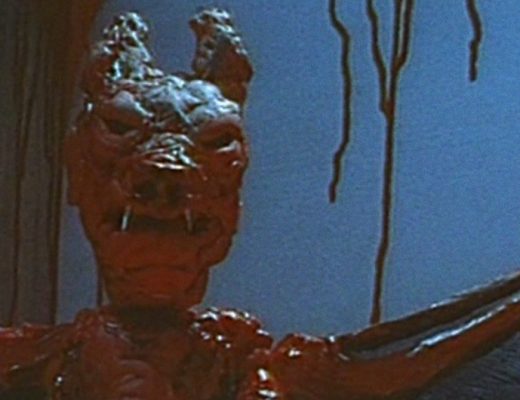